A silkscreen exhibition by bruï (Liverpool)

Since graduating with an Illustration degree at the University of Westminster Nick made the choice to return to the North of England to find an independent route into the creative world, believing Liverpool to hold the appropriate balance between quality of living and creative culture. Liverpool was one of the most important docklands in the country and was responsible for importing goods vital to the success of many industries in the UK. This heritage is deep routed in Nick’s practice and is ultimately what led to this body of work. He runs a DIY screen printing studio in an old mill warehouse in Liverpool’s Baltic Triangle; an area exploiting its degeneration to regenerate by populating old abandoned spaces with new creative start-ups, watering holes and studios. Working with a manual printing process on the ashes of this industrial area keeps Nick connected with the blue-collar roots of his home. There is a special kind of creative community that fills these spaces, a tribe of grounded individuals willing to persist and create despite the obvious lack of financial support, many working long laborious hours to support themselves.

Inspired by beat generation writers such as Jack Kerouac, Allen Ginsberg and William. S. Burroughs, Nick has been keeping written journals of daily life, quickly finding that the content of these writings drew direct parallels with the lives of these young beat creative’s during very similar stages of their own careers. There is a shared feeling of anxiety and frustration, contrasted with times of liberation, bohemian nights, expanding networks of doers and makers and a true dedication to the arts. The idea of such a romantic lifestyle juxtaposed with genuine struggle to thrive began to forge a visual language for a feeling both universal and timeless yet exclusive to those who know. ‘Blue Collar Handjob’ attempts to capture this timeless mood by constructing landscapes built with digital working references set amongst familiar imagery of hobo culture and blue-collar work.

This ain’t no sob story though. This is a celebratory exercise, a salute to those mad enough to keep swimming against the barrels just to catch the surf, the ones who never yawn or say a commonplace thing. This is Blues music for your eyes. Stand back, crack a beer, moan a little, laugh a lot. 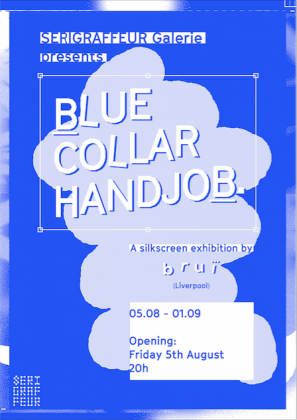