Susann Pönisch was born in 1979 and grew up in Berlin, Germany, where she lives today. In 2005 she began to screen and print her own drawings at the "Fleischerei", a free workspace for screen printing at the Rosenthaler Platz in Berlin. Since then screen-printing became her favourite technique. Today Pönisch produces her prints by drawing directly on transparent paper using several different techniques and tools, like acrylic paint, auqarell, coal, fineliner and many more.
Pönischs prints are based on these drawings and there are no digital tools involved in producing the prints.

She will shows us recents etchings produced in the Atelier KHB.


Marion Jdanoff is involved in Palefroi, an art collective, based in Berlin, Germany. Palefroi produces limited editions of handcrafted books and posters.

Drawing is for her a way to make mountains when one is bored in the plains, to construct armies and send them dying, or not, on the battlefield, to do extremely dangerous and scientific experiments and saturate the rest with animals, for the sport and/or the mythology. 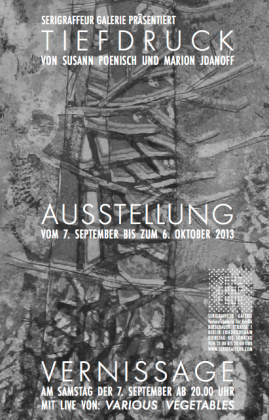