Txus is a Strong personality and well known in Berlin's Silksreen scene. Some even talk about him as one of the first who brings Silkscreen to the streets and helped the underground scene to get it's Identity: as the guy who told the guy who told some other guy how to do silkscreen.

He also has been a recognizable face of the Tacheles, being one of the few having is workshop directly on the streets.

Behind a Huge smile and his all overprinted clothes (he is also what you can call an everyday punk-clown) is indeed a man that focuses on giving his knowledge to others and is a sponge to other peoples engagement, with a lot of empathy.

HEAL YOUR TRAUMA is the result of several month of him putting his creativity onto paper (he is usually more on 2nd hand clothes and pieces of recycled-trash). New motives has been created during his trip to Canada where he has been making workshop with the native community. 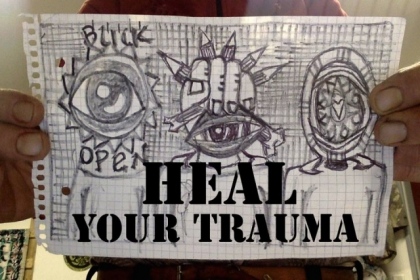