We are happy to invite our long time friends from Tind Silkscreen to leave Athen and bring their work to Berlin.

Manolis Angelakis (b.1981), aka tind, lives and works in Athens, Greece. He uses a plethora of materials, new and old methods, specifically in the field of silkscreen-printing.

Although he was trained as a graphic designer, his knowledge as a screen printer stems from working as his father's (or papa tind) apprentice from a very early age. They currently share their working studio and learn different aspects of the trade from one another.

Manolis has also worked as set designer in several films such as A touch of Spice and Uranya; he has produced and taught master printer/silkscreen workshops for adults and children as well; and his work has been recognized by the Greek Graphic Design Awards.

He is currently working on his project Error is Superior to Art, that attempts to redirect the public's view and awareness to the value of printing errors and the magnificence intrinsic in them. 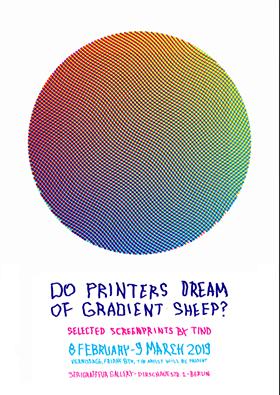